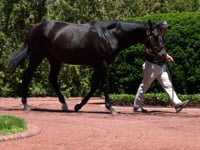 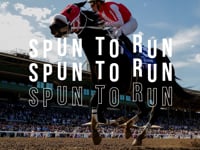 The fastest son of Hard Spun, from the influential Danzig sire line, Spun to Run demonstrated class and remarkable speed during his sophomore campaign. A top miler and millionaire, he concluded his campaign with three consecutive triple digit Beyers, including an open length victory in the Breeders' Cup Dirt Mile (G1).

Continuing the legendary Danzig sireline, and from the sire-making family of Constitution and Competitive Edge.

Among the top three-year-olds of his crop, Spun to Run demonstrated both class and remarkable speed during his sophomore campaign. In the Breeders’ Cup Dirt Mile (G1), he defeated some of the best of his generation, scoring a determined 2 ¾ length victory over Omaha Beach, Improbable, Mr. Money, Coal Front and Diamond Oops, while posting a 109 Beyer Speed Figure.

Following his triumph in the Breeders’ Cup, Spun to Run closed his three-year-old campaign with a runner-up finish to Eclipse Champion Maximum Security in the Cigar Mile (G1), earning a 105 Beyer. Spun to Run also placed in the Haskell Invitational (G1) and retired with career earnings of $1,160,520.

Spun to Run is the fastest son of Hard Spun (Danzig) at stud, posting Beyers of 110, 109 and 105. His first three dams are all juvenile winners including his dam, Yawkey Way (Grand Slam), who was a juvenile stakes winner at Saratoga and is also a multiple stakes producer. Hard Spun is the sire of 12 Grade 1 winners and 19 Grade 1 stakes horses lifetime.

Pedigree Analysis for Spun to Run

Breeders’ Cup Dirt Mile (G1) winner Spun to Run is the fastest son of Hard Spun, himself a world-record breaking sire, by Danzig. His is out of a stakes winning and multiple stakes producing mare, and from the immediate family of the red-hot young sire, Constitution.

Spun to Run is out of a mare who stems from the Mr. Prospector line via Grand Slam, a son of Gone West, and he should cross well over mares by other sons and grandsons of that horse. On this cross, Hard Spun and sons have four stakes winners out of mares by Mr. Greeley, and another out of a mare by that horse’s son, El Corredor; two stakes winners out of mares by Elusive Quality (sire of Quality Road); and grade one winner Out For a Spin from a daughter of Came Home. This also suggests mares by Speightstown and his son, Munnings.

One of Hard Spun’s best runners, Hard Not to Like is out of a mare by Tactical Cat, a son of Storm Cat, and also has stakes winners by Storm Cat himself, as well as out of daughters of Forest Wildcat, First Samurai (by Giant’s Causeway) and Stormy Atlantic. Storm Cat is by Storm Bird, and there is a stakes winner for Hard Spun out of mare by Storm Bird son, Summer Squall, and Hard Spun has grade one winner Wicked Strong out of a mare by Charismatic, a son that horse.

Hard Spun has sired grade one winner Hard Not to Love out of a mare by Vindication, and graded winner Big John B., out of a mare by Doneraile Court, both sons of Seattle Slew. He has also sired four stakes winners, one grade two, out of mares by A.P. Indy, and another out of a mare by that horse’s son, Pulpit (sire of Tapit).

There is no progeny information for Spun to Run at this time.