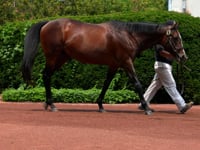 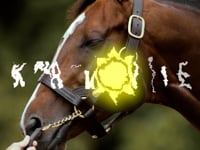 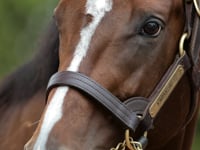 Bred and raced by the Niarchos Family, Karakontie was campaigned primarily in France, where he won a pair of group races at 2 including the seven-furlong Grand Criterium (G1). Karakontie trained on at 3 to capture the classic French Two Thousand Guineas (G1) before traveling to Santa Anita Park, where he defeated older horses in the Breeders’ Cup Mile (G1) and recorded a 110 Beyer Speed Figure.

Named a TDN “Gold” Value sire for 2022. “He’s a conduit of pure class, every way you cut it, and he has shown that he will take such chances as he’s given” – Chris McGrath

Bill Oppenheim’s Value Sire for 2019: “Karakontie could be poised to succeed the likes of Kitten’s Joy and English Channel in American turf racing … and will have nearly maximum opportunity to make a good impression in almost every racing context (dirt, grass, America, Europe, etc.).”

Won the Breeders’ Cup Mile (G1) with an electrifying stretch run in 1:32.88, recording a 110 Beyer—the year’s top figure on turf

Won three of four starts at 2, including the prestigious Grand Criterium (G1) and Prix La Rochette (G3); won the French Two Thousand Guineas (G1) over a top-class field at 3

From the immediate family of Kingmambo, one of the leading sires of the past 20 years; third dam is the incomparable Miesque, a two-time winner of the Breeders’ Cup Mile (G1)

A Group 1 winner at 2 and hero of the classic French Two Thousand Guineas (G1) and Breeders’ Cup Mile (G1) at 3, Karakontie is by a two-time leading sire son of Storm Cat out of the fabulous family of Miesque, also the dam of Kingmambo.

Bernstein sired champion Japanese 2-year-old Goshawk Ken from a daughter of Grand Slam (by Gone West, who could also work with Karakontie through Elusive Quality), as well as graded stakes winners out of mares by Gulch (who would be good through Thunder Gulch) and Seeking the Gold. From Mr. Prospector’s Fappiano line, Bernstein sired graded winners out of mares by Cryptoclearance (grandsire of Candy Ride), Quiet American (who could be good through Midnight Lute), and Rubiano.

Bernstein also has stakes winners from mares by Roar (by Forty Niner, also sire of Distorted Humor) and Smart Strike (sire of Curlin and English Channel). Numerous, the broodmare sire of a Bernstein Grade 1 winner, is bred very similarly to Karakontie’s second dam. Mr. Prospector is a son of Raise a Native, and, from another branch of that line, Bernstein sired a stakes winner out of a mare by Wavering Monarch, the sire of Maria’s Mon.

Blushing Groom appears in 14 of Bernstein’s stakes winners, and he might be introduced here through Cherokee Run, Mt. Livermore, Rahy, Runaway Groom, and sons.

Karakontie is out of a Halo-line mare, and breeding a stallion back over his broodmare sire line often works well. As Bernstein has had success with mares by Southern Halo, it would be interesting to try mares by More Than Ready, who is bred on a similar cross to Karakontie’s dam.

Bernstein has a stakes winner out of a Seattle Slew mare and another out of a mare by that horse’s son Doneraile Court. The Seattle Slew line through A.P. Indy son Pulpit came up with Sky Mesa out of a sister to Bernstein; Sky Mesa himself and the similarly bred Jump Start might also be interesting combinations with Karakontie.

Out of mares from the Relaunch line, Bernstein has sired a graded stakes winner from a daughter of Tiznow and stakes winners from daughters of Honour and Glory and Skywalker (sire of Bertrando; grandsire of Officer). He has also done well with Damascus-influenced mares, including through Crusader Sword, Gilded Time, and Private Terms (by Private Account, who worked with Karakontie’s female line).