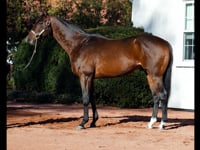 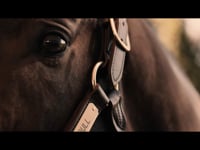 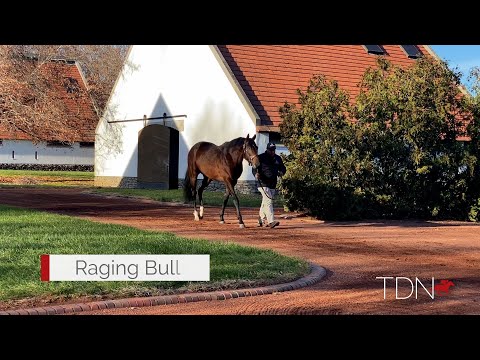 Raging Bull (FR) is as tough as they come – he won or placed in 12 graded stakes, including victories in three Grade 1 events. An earner of over $1.7 million, this hard-knocking stallion won or placed in 9 of his 15 Grade 1 starts. He was consistently competitive at the highest levels over multiple racing seasons, scoring seven 100+ Beyers. He is a son of Dark Angel (IRE), a perennial leading European sire of sprinters and milers.

Sire Dark Angel (IRE) has been a perennial leading European sire of Sprinters/Milers.

“Raging Bull (FR) is a knockout physically,” said Gainesway General Manager Brian Graves.  “His seven triple digit Beyer speed figures and his performances over 15 Grade 1 events are impressive. His sire, Dark Angel (IRE), has become one of the most influential sires in International racing.”

First covered mares will be offered in 2022.

A three-time grade one-winning miler with earning of over $1,600,000, Raging Bull (FR) is by Dark Angel (IRE), a Northern Dancer-line stallion acknowledged as Europe’s leading sire of sprinters and milers.

The cross of Dark Angel (IRE) with mares from the Danzig line has proved to be a prolific one. In Europe this has principally been through mars from the Green Desert and Danehill branches, Danehill looking a particularly good fit here. In North America, this would suggest trying mares by such as War Front and sons, Hard Spun, Exchange Rate, Belong to Me and Langfuhr.

Dark Angel’s grandsire, Royal Applause, is a product of the Northern Dancer/Secretariat cross that also produced Storm Cat. The cross of Dark Angel (IRE) with a Storm Cat line mare by a son of Giant’s Causeway is a group one producing one, and could be tried through Giant’s Causeway and sons such as Not This Time, Carpe Diem, Eskendereya, First Samurai and Creative Cause. Giant’s Causeway is a brother to Freud and bred on the same cross as After Market. Other branches of Storm Cat, such as Tale of the Cat, Forestry, Stormy Atlantic, Forest Wildcat and Bernstein are also worth considering, and Van Nistelrooy is potential interesting.

Another branch of Northern Dancer that has found success under Dark Angel is that of Sadler’s Wells. This includes through Galileo, who might be found in North America through Cape Blanco, Treasure Beach (GB) and Magician (IRE). This cross could also be tried through El Prado (IRE), the sire of Medaglia d’Oro, Kitten’s Joy and Artie Schiller. Sadler’s Wells is three-quarters brother to Nureyev, and Dark Angel (IRE) has a group winner out of a mare by Fasliyev, a Nureyev son who stood in North America. Other possible branches including Theatrical (IRE), Spinning World and Atticus.

Raging Bull (FR) is out of a mare by Mr. Prospector line sire, Mr. Greeley (by Gone West). It would actually be interesting to cross him back over other Gone West line horses, particularly through Elusive Quality (sire of Quality Road and Smarty Jones), and also through Proud Citizen, Speightstown (sire of Munnings) and Grand Slam. The cross with the Kingmambo branch of Mr. Prospector has done well (as has the cross with Kingmambo’s brother, Miesque’s Son). Kingmambo is also sire of Lemon Drop Kid. Dark Angel has a group winner out of a mare by Dubawi (IRE) from the Seeking the Gold branch of Mr. Prospector, which should be particularly good here, and can be found through Petionville, Mutakddim and Cape Town.

Dark Angel is out of a mare by Machiavellian, and he as a grade one winner when crossed back over that line. In North America this can be found through Street Cry (IRE), who can be introduced through Street Sense (from the same male and female line as Raging Bull’s broodmare sire, Mr. Greeley) and Street Boss. Machiavellian combines Mr. Prospector and Halo, and they are also found together in Fusaichi Pegasus (sire of Roman Ruler), the broodmare sire of a group winner by Dark Angel’s sire, Acclamation (GB). Fusaichi Pegasus has a very similar pedigree to Distorted Humor, the sire of Sharp Humor, Flower Alley, Any Given Saturday, Jimmy Creed and Maclean’s Music.

There is no progeny information for Raging Bull (FR) at this time.