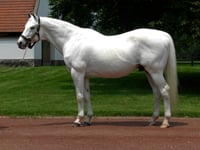 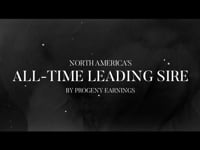 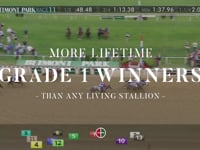 Tapit has emerged as one of the most influential and breed-shaping stallions of the past half-century. America’s most dominant sire, Tapit has sired 30 Grade 1 winners, 33 yearlings to bring $1 million or more at auction, and earners of over $194 million on the racetrack for the most progeny earnings of any North American sire ever.

Three-time Champion Sire and the ONLY top 5 sire 11 of the last 13 years.

The only sire to sire four Belmont S. (G1) winners, since the 1800s sire Lexington.

2022 yearlings have sold for up to $1.1 million, including a filly session topper at Keeneland September. A mare in foal to Tapit topped the 2022 Keeneland November Breeding Stock Sale.

2022 juveniles sold for up to $1.7 million, including a session topper at the OBS Spring Sale of 2-Year-Olds.

Tapit has enjoyed remarkable success with mares carrying Storm Cat, who appears in 16 of his stakes winners – 12 graded and four Grade 1. This includes Grade 1 winners out of mares by Hennessy, Bluegrass Cat, Sir Cat, and Tabasco Cat and graded winners from daughters of Forestry, Giant’s Causeway, Harlan’s Holiday, and Menifee. Deputy Minister daughters have supplied the dams of Tapit Grade 1 winners Frosted and Tapizar, and Tapit also has a graded winner out of a mare by Graeme Hall, a son of the Deputy Minister horse Dehere.

Tapit’s third dam is a sister to the influential sire Relaunch, and Tapit has six stakes winners out of mares carrying Relaunch, who can be sourced through Honour and Glory and Tiznow. From the Valid Appeal branch of In Reality, Tapit has two stakes winners including classic winner Tapwrit (out of a mare by Successful Appeal.)