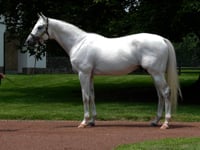 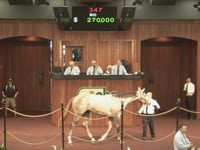 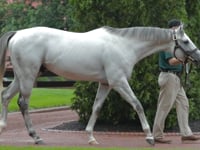 Standing at Iowa State University for $3,000

Won the Kelso Handicap (G2) at Belmont Park in a near track-record 1:32.90 while defeating Breeders’ Cup Dirt Mile (G1) winner Tamarkuz and earning a 108 Beyer, the year’s second-highest dirt figure at one mile

Posted a wire-to-wire victory in the Westchester Stakes (G3), romping by 6¾ lengths and earning a 105 Beyer

A leading second-crop sire by percentage of winners and stakes performers.

Pedigree Analysis for Anchor Down

Sweet Lulu is by Mr. Greeley, a Gone West son who is also broodmare sire of a Tapit Grade 1 winner. Anchor Down should also be suited to mares descending from Gone West through Grand Slam and Speightstown. Gone West is by Mr. Prospector, and Anchor Down’s pedigree particularly suggests trying the Fappiano branch of that line. Tapit has a Grade 1 winner out of a mare by Cryptoclearance (grandsire of Candy Ride), and other sources are Quiet American, Rubiano, and Unbridled, including through Unbridled’s Song and sons, Empire Maker, and Broken Vow (who appears particularly interesting).

Tapit has crossed very well with Mr. Prospector through Forty Niner, whose sons Distorted Humor and Editor’s Note have provided the dams of Tapit Grade 1 winners. There is also a Grade 1 winner out of a mare by Carson City – whose son Cuvee is from a family that has been exceptional with Tapit – and Carson City would also be good through City Zip. Other branches of Mr. Prospector that have succeeded under Tapit include Smoke Glacken, his sire Two Punch, and Woodman.

Looking at the Northern Dancer line, Tapit has been exceptional over Storm Cat-line mares, getting 12 graded winners on the cross. Virtually any branch of that sire line would appeal here, but Giant’s Causeway and sons would be particularly interesting. From the Sadler’s Wells branch, Tapit has two stakes winners including Grade 1 winner Laragh from daughters of El Prado and a stakes winner out of a mare by that horse’s son Medaglia d’Oro, also suggesting daughters of Kitten’s Joy and Artie Schiller. The cross of mares by Northern Dancer grandson Deputy Minister resulted in Grade 1 winners Tapizar and Frosted, and there are also Tapit-line stakes winners out of mares from this line by Ghostzapper (by Awesome Again) and Graeme Hall (by Dehere). From the Danzig branch, mares by War Front could be intriguing here to duplicate Tapit’s dam and her three-quarter brother Rubiano.

Tapit is from a noted sire-producing family that includes Relaunch, a brother to Tapit’s third dam. Tapit not only has a stakes winner out of mare by Relaunch but also from mares by Relaunch-line stallions Bertrando and Honour and Glory, which suggests daughters of Tiznow.

Tapit has stakes winners out of Caro-line mares by Cozzene, In Excess, and Indian Charlie; a Grade 1 winner out of a mare by Concern, who is by Broad Brush, also sire of Include; and champion filly Untapable out of a mare from the Kris S. branch of Roberto.